The Yamuna, also known as the Jumna or Jamna, is the second largest tributary river of the Ganges and the longest tributary in India. Originating from the Yamunotri Glacier at a height of 6,387 metres on the southwestern slopes of Banderpooch peaks of the Lower Himalaya in Uttarakhand, it travels a total length of 1,376 kilometres and has a drainage system of 366,223 square kilometres, 40.2% of the entire Ganges Basin. It merges with the Ganges at Triveni Sangam, Prayagraj, which is a site of the Kumbh Mela, a Hindu festival held every 12 years.

Let's work together and activate cities, communities and people along Yamuna River in India.

You want to join an existing cleanup close to your home? Select a location and let us know how many of you will be there.
Join

You want to organise your own cleanup? Define a route, reach out to your community green office to get material and assistance.
Organize

Want to keep up to date with regard of our actions and results? 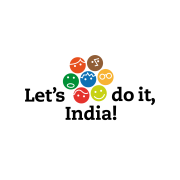